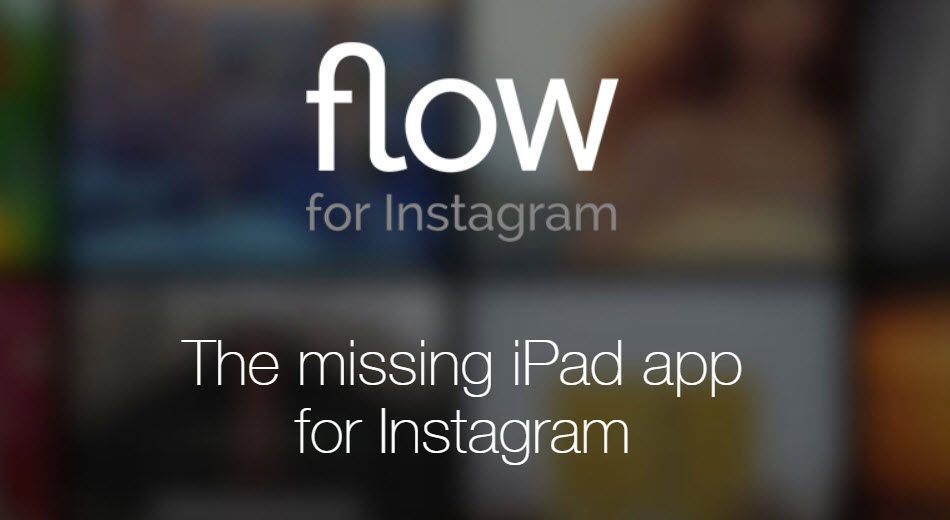 Instagram is great for capturing and sharing moments from your iPhone, but what about viewing those moments on your iPad? We felt something was missing…

“Flow for Instagram” is designed especially for your iPad. Scroll through your feed like never before and experience more on the iPad’s larger display. Explore and comment on moments from friends as well as discover and bookmark interesting content from around the world.

And if you feel lucky, you can play your favorite mobile phone casino on your iPhone or iPad.

Designed for iOS7 but backward compatible with iOS6. This app runs on all iPads apart from the original iPad. For the best experience we recommend using WIFI or LTE.

Why did we decide to build Flow?

We started off building an Instagram shopping app for Thailand as IG is really popular there and there are 10,000s of shops using the platform. We wanted to fix the discovery problem for IG shoppers.

During the design phase we built an iPad prototype of the shopping app and fell in love with browsing Instagram on the iPad. While the shopping app idea was interesting there was a bigger problem to tackle. No iPad app for Instagram! We already had a working prototype so decided to continue.

Later in the development, we returned to the Instagram shopping concept and included charts of popular IG shops in each country within the Explore section of the app.

We think it is the browsing experience and focus on the photos. It’s fundamental difference is seeing a dozen photos at a time and scrolling through your feeds without the clutter of comments or profile pictures.

When using the iPhone you dip into your home feed regularly but don’t generally scroll back far or dig deep into other peoples’ feeds. With Flow we encourage discovery and make browsing profile, places and tags as easy as viewing your home feed.

Another difference when compared to existing iPad apps for Instagram is the attention to detail on design and user interactions. We wanted to build an app that felt like it could be comparable to the official IG app in terms of quality. In pursuit of this goal we spent a lot of time making sure things were smooth and that photos and videos loaded as fast as possible.

Last but not least Flow has exclusive content. Charts of the most popular users and shops for every country. This makes it easy for people to find users to follow and shops they may be interested in buying from. This feature has proven to be very popular from user testing in Thailand.

No camera functionality. 3rd party apps are not allowed to upload photos or videos to Instagram directly. While this is a bit of a bummer in general it’s not such a big deal for an iPad app. Most users’ regular access to the platform is to browse and interact rather than post so we felt this wasn’t a big omission.

More important for us is comments. Instagram does allow some apps the ability to post comments via the API but to get this they must be whitelisted. We have applied but haven’t heard back, we have been told it can take 45 days. We hope that once they see the app it will be possible for us to access the API and we can allow our users to post comments.

At the moment Flow is only viewable in landscape mode. Portrait view is coming in an update soon, we just needed to ship v1 to get some feedback and validation that this was what people wanted.

Are you funded? Is this a Startup? What is your business model?

No we are not funded, and no we are not trying to be another photo sharing startup, this was essentially a hack project that turned into a passion project for us. We built the app because it’s something we wanted to exist and we are releasing the app for free because we want to share it with as many people as possible.

We may add some premium features such as account switching in the future to help cover costs but we don’t expect these will impact most users. If Instagram include ads in the feed we will run those ads but at present we don’t have any plans to add ads to the app.

Why do you think Instagram haven’t built an iPad app yet?

We are not sure. Perhaps it’s because the iPad is mostly for viewing photos rather than taking photos? Perhaps they are trying to stop people looking silly holding up iPads taking photos everywhere. It will be interesting to see if they do release an app. We certainly feel there is a need for an app, otherwise we wouldn’t have built Flow. The community on Twitter seem to agree: http://bit.ly/NoiPadApp

How has the response been to the launch of the app?

Our launch was coverd by TNW, Cult of Mac, 9to5Mac, iDownload Blog, TechInAsia, RemondPie, Ultralinx, AG Beat, and many more. (todo: link these)

Some choice quotes from the press…

“If Instagram was ever to release an official app for iPad, one would imagine that it could and should look a little like this.”, The Next Web

“the best way to use Instagram on the iPad’s larger display, look no further”, Cult of Mac

What’s more we have had great response from Instagram so far. Mike Kruger, Instagram’s co-founder described the app as a “Nice iPad experience for IG”. Instagram’s former head of design Tim Van Damme tweeted “Flow is by far my favorite Instagram iPad app”.

The reaction from users has been overwhelmingly positive too. In the first week the app has been downloaded over 20,000 times, clocking up 100,000 sessions, and over 115 ratings with 4.7 star average. Users have been sharing the app with friends and we are seeing good traction.

Users have been sending us feedback too. So far the biggest requests are portrait mode, account switching, and slideshow support. We are working on the first two for 1.1 (which should arrive mid Jan) and have slideshow support on roadmap for future version.

Who built the app?

The app was primarily designed and built by the Codegent apps team in Bangkok, lead by Luke Hubbard and Jirasak Saebang. The duo have worked together for almost a decade and get a kick out of building mobile apps used by millions of people daily. Nick Peasant based in our London office worked alongside the Bangkok team helping with UX design.

We’re a world-class digital design studio based in London and Bangkok, creating products that our clients and customers love using.

At Codegent, we are all digital enthusiasts working as a team crafting products with passion. Our services include digital strategy, user experience, design and build in the areas of web, mobile, apps and social.

It all started in 2004 and in 2013 we acquired design agency Thin Martian. Together we have created award-winning projects for some of the most interesting brands on the planet. We have also been developing our own products since 2010. Although we’ve made a few wrong moves along the way, we’ve learnt a hell of a lot, too. The result is a growing sustainable business consisting of a suite of products: mobile apps, Software as a Service (Saas) and one or two Joint Ventures.

Luke is Codegent’s Technical Director and a co-founder. He also had the original vision for developing Flow. He leads up our team in the Bangkok office who are behind many award-winning client projects. Luke has been developing digital products since he was 16. At Codegent he has led development projects for Gap, ITV, Barclays, Nickelodeon, Microsoft and Nestlé. He has also led the development of our own products including The Learn Series, Twilert and Kizzu.

Luke was the lead developer on the Open Source project, Red5 and is widely respected within the development community. Prior to starting Codegent, Luke worked for digital agency, Reading Room.

Jirasak (AKA A) has been based in our Bangkok office since 2004. Originally a Flash Developer he has designed and developed Flash applications for Skechers, CBS Outdoor, The Gherkin, BBC, Oasis and many more. He has been responsible for many of our agency awards, notably an FITC award for Best Motion Graphics in 2009.

In 2011 he made the transition into iOS development and has led our Apple Apps team since then. Notably he built all the game mechanics for our kids educational apps brand Kizzu. A has an awesome eye for detail and will always add a touch of flare to any project he works on. He will see a project over the line with a fine polish and a knowing smile.

Nick is responsible for creating design concepts for new digital projects. He has been with Codegent for 18 months but began his career in print design and over the past few years has specialised in user experience and interface design. Most recently he has been working on a new tablet app for Radioplayer and with a new B2B start up on the branding and UX for their launch product.

Nick has worked with many well-known brands including BBC, ASOS, Lexus, Virgin, Time Out and Radioplayer.

Mark’s biggest talent lies in being able to marry creative with technical innovation. He has his finger on the pulse of emerging innovations and uses his knowledge to craft beautiful and useful digital products. Despite his passion for trend-spotting, Mark’s role is to ensure that we take the relevant steps to get a clear view of the user, the tasks he or she will need to take through their journeys, how content is surfaced at different times and how apps are best structured to make the experience as intuitive as possible.

Prior to joining the digital agency sector and co-founding Codegent Mark worked at PwC Consulting as a CRM IT consultant. He specialised in large-scale CRM implementations for the telecommunications sector. Clients included Hutchison 3G (Three), Vodafone, Caudwell Group (Phones 4u).

David manages the commercial relationship between the agency, our app labs and clients. His key skills lie in being able to work with people to get under the skin of a brief and help clarify and define the key objectives that the project will need to meet. David’s strength is his ability to distil complex ideas into clear concepts that everyone can get behind.

One of Codegent’s founding directors in 2004, David Hart has acted as the Vice Chairman of BIMA (the British Interactive Media Association) and currently sits on the BBC’s Online Advisory Group. He has also appeared on Newsnight discussing issues surrounding mobile apps. Prior to Codegent, David worked for The Economist and Pearson, before moving into the digital world in 1999.